Using Communications to Make the Story, Not Just Tell It

Florence (left), one of the main characters of popular East Africa soap opera Makutano Junction, makes her first move to create an agribusiness. She calls an agriculture support call center to ask about the cost of a maize shelling machine.

Often when we think of communications in development efforts, we focus on “telling the story”—the story about our impact—prior to and after we’ve implemented our programs. Over the last year, working as the East and Southern Africa Regional Director of Africa Lead, I’ve witnessed our team come to understand the power of communications in “making the story.”

A recent example of this is the Africa Lead collaboration with Makutano Junction, a popular TV soap opera in Kenya, Tanzania and Uganda. The show’s focus on Florence—a young and jobless woman who returns to her rural village as she starts an agribusiness—is a result of our new approach to using communications to achieve results, not just share them. As a result, Florence’s story is reaching millions of viewers across East Africa and is supported by an SMS messaging campaign. Viewers can even watch previous episodes on YouTube and track plot developments on Makutano Junction’s Facebook page.

Makutano Junction was quite a departure from Africa Lead’s staple activities, which have mainly consisted of in-person leadership trainings, events facilitation and organizational development. Why the change? Last year during a strategic planning exercise, we questioned ourselves about the audience and scale of our implementing mechanisms. In the process, we recognized the value of in-person events, but we agreed they had limitations, such as lack of reach, high cost and the “what comes after” dilemma. We knew that young people represented the future of African agriculture, but we noticed that our audience was more often of an older demographic, especially in the policy arena. We needed to find ways to reach youth.

Our answer was to shift to a communications-based strategy using digital technologies and multimedia. We decided we wouldn’t relegate communications to a support function or a cross-cutting objective; rather, we established it as one of our three strategic anchors. I won’t deny that the transition has been a challenge for our team, both technically and culturally, but through constant reinforcement we are gradually making a habit of leading with communications.

As soon as Makutano finishes airing, we will start working with the same production company, Mediae, on a new show called “Don’t Lose the Plot.” The reality TV show will focus on four young East African farmers who will compete to achieve the highest profits in one-acre plots, each with access to a range of advisory services. Additionally, in Tanzania we have started working on “Mchumia Juani” (from the Swahili proverb, “Mchumia juani, hulia kuvilini” meaning, “He who toils in the sun feasts in the shade”) alongside Media for Development International, which will feature 52 radio episodes, two feature length films and a social media backbone. All of these efforts will have a comprehensive monitoring and evaluation component.

This new approach isn’t just limited to television and radio. We have added a communications module to our five-day Champions for Change in-person training. The module encourages and supports participants to use social media for community organizing, including mobile apps like WhatsApp. This is driving an ongoing learning process through networking and information sharing. We are also designing digital and mobile solutions to produce inclusive policy formulation and dissemination.

In addition to being a sound approach to technical programming, this communications strategy has had unintended benefits. One of these is partnering, which incidentally is another of our three strategic anchors. We’ve had lots of good people and organizations both interested in our communications-based projects and also asking us to get involved in their own similar projects. It may be pointing out the obvious, but communications is a great antidote to insularity and silos.

Last but far from least, we are having more fun. When we formulated team goals and principles last year, the staff insisted that “fun” be one of our three goals. I believe deeply in enjoying work, but I can’t get all that excited about bowling parties. (Fortunately my Kenyan staff has a deeper appreciation for fun than I do.) And yet, I have had more fun working on Makutano Junction than I have had in years. I spent a thoroughly exhilarating morning with an invited partner from USAID’s Kenya Agriculture Value Chain Enterprises Project writing technical content for the scriptwriters. Later, our team visited the set during shooting.

Above: The Africa Lead team looks on as the cast and production crew of Makutano Junction shoots an episode for the current season of the hit soap opera.

We’re also letting innovation drive our team building. To reflect our programmatic communications efforts, we recently formed our own WhatsApp group. As a result, our team is more connected to each other and our communications work. Here is a post from our communications team at the script writing session with our partners in Tanzania: 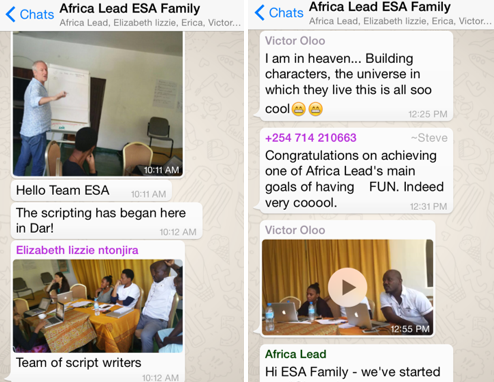